Wichan Nanthasri's first half goal proved enough to sink Chiang Rai United and help TOT climb back into the top half of the TPL table.

The midfielder cut inside his marker and rifled home in the 32nd minute to secure TOT's first win in seven league outings.

I'll be polite and say that the opening half an hour was a cagey affair before TOT took the lead.

Chiang Rai had plenty of possession after the break, but were held off by some stubborn TOT defending. Leonardo and Nantawat had chances, but they were left frustrated as their efforts failed to find the target.

The returning Weera in the TOT goal had a quiet night with only a few routine saves to deal with throughout the 90 minutes.

TOT were quite happy sit back and spring on the counter attack as the match progressed. However, they were almost undone three minutes from time when a looping header from Antonio Claudio clipped the top of the bar.

The 1-0 win tonight was TOT's third clean sheet out of the last four and you can see where their strength lies. Chiang Rai's away form has been dismal this season with only five goals netted in ten matches. They have still to win at home this season, yet I'm sure the Orange Power will be grateful that nine of their last fifteen games will be played at the United Stadium.

Man of the Match: Lee Junki - Solid at the back 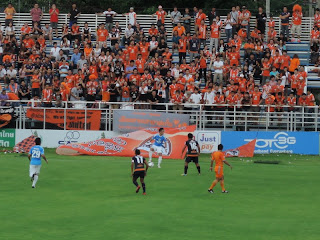