Going into this encounter, BEC Tero sat fifth from top while Ratchaburi were five places from the foot of the table. The hosts had lost their four previous games in the league and cup and were under the guidance of 34 year old Rangsan Viwatchaichok after Rene Desaeyere had been fired after barely three months of service. Ratchaburi were also under orders from a new tactician with Jordi Blanco Moreno supposedly in charge. However, it seemed that Master Fluke was calling the shots from the bench.

The early action saw Rattana's crisp strike forcing Pisan into a decent save while at the other end a Cleiton Silva header flew narrowly wide of the post.

Ratchaburi took the lead at the half point of the first half when Jhon Obregon neatly converted a penalty after the referee judged that Attapong had his legs sliced from underneath him in the box. The Colombian Balotelli celebrated the opening goal with as much enthusiasm as his Italian namesake.

There was a brief flurry of activity at the beginning of the second period with Obregon testing Pisan while Peerapat clipped the Ratchaburi crossbar following a shot from a tight angle.

The away side pressed for a second as the hosts ran out of ideas. Eakarat's shot come cross flew across the goal while Pisan acrobatically tipped a Jang Gil Hyeok shot wide as the pressure increased.

In the 79th minute, it was game over as Jose Luis Cordello drilled home from ten yards to make it 2-0 after a corner kick had landed kindly into his path.

With four minutes remaining, Ratchaburi were presented with a penalty when Pisan carelessly left a leg out for Douglas to trip over it. The Brazilian got up and sent the Tero keeper the wrong way to make it 3-0.

A bad day at the office was compounded two minutes later when Apiwat was given a straight red for a brutal body check on Douglas.

It finished 3-0 and apparently it was all the referee's fault as the Tero fans directed their abuse to the man wearing green. It grows tedious when fans keep pinning the failures of their own side onto the shoulders of the match officials.

In all honesty, BEC Tero were extremely poor, but credit must be given to Ratchaburi as they played well. Their defending was solid and the two new signings, Jhon Obregon and Jose Luis Cordello, certainly added some creative flair in the final third. 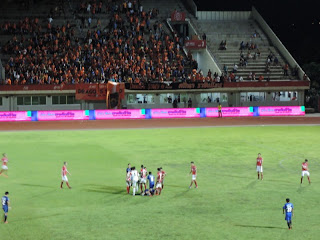 Posted by BKK Football Blog at 7:26 AM