It was a fairly quiet start to proceedings with the hosts coming closest to a goal when Kittipong almost pounced following a fumble by Teerapong in the Ayutthaya goal.

But it was the away side who took the lead as Singh Tarua were robbed of possession in the 43rd minute. A quick counter attack lead by Durosinmi saw the Nigerian skin Ali Diarra before he fired across the box for ex-Thai Port loanee Anusak to knock home.

Singh Tarua quickly got back on level terms when a corner was only partially cleared to Chalermkiat on the edge of the box. His low drive took a deflection off Daniel Melo to equalize.

Ayutthaya seemed content to sit back and soak up pressure early in the second half. A low shot from Christen hit the base of the post while Antonio Vega's strike into the side netting was the closest that the Ancient Warriors came to scoring.

With a quarter of an hour left, it was advantage Ayutthaya as Chalermkiat was ordered off after receiving to yellow cards. Vega and Durosinmi both came close as the guests became more adventurous.

However with four minutes left, Rachanon was given a yellow card for a foul, and then he wouldn't retreat ten yards to allow Ali Diarra to take a quick free kick. The fact that he was taunting Diarra left the referee no other choice than to produce a second yellow card.

Mathias Christen appeared to have drilled home the winner shortly afterwards, but neither the referee or the linesman signalled that the ball had crossed the line despite the celebrations of most inside the PAT Stadium.

A draw would have been a fair result, but it wasn't to be as Christen netted a rebound after Teerapong had parried a Leandro shot into his path.

The PAT Stadium was ecstatic at the end as this last gasp victory could prove pivotal in Singh Tarua's season.

Ayutthaya would have been happy with their performance and application yet will regard the loss as being slightly unlucky.

The best player on the park was Ali Diarra, but I feel I can't award him man of the match after he was skinned far too easily by Durosinmi for the goal. Apart from that, he was immense. 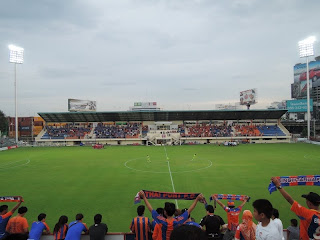