Roi Et United quickly stamped their mark on Division 2 Champions League Group B by edging to the top of the group with a 2-1 victory over Korat. 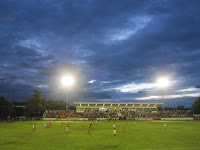 The scoreline suggests that it was a tight game, but in reality it was a far more comfortable victory for the White Squirrels.

The opening period was one way traffic and the biggest surprise of the half was that it took Roi Et until first half injury time to open the scoring.

Korat looked to have weathered the first half storm, but three minutes into stoppage time they fell behind when a low powerful shot from Teerapong found it's way into the bottom corner. 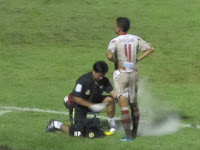 The Swatcats improved after the break and forced a couple of chances. Just as Korat were beginning to get a foothold in the game, they were hit with a sucker punch midway through the second half. A free kick from the right wasn't dealt with properly by Korat's keeper, Prasit, and the rebound was knocked in by Kennedy Ihenacho. There may have been a foul on the keeper in the build up to goal but Roi Et weren't caring as the tie appeared to have been put to bed.

It was heading that way until Korat were awarded a penalty deep into injury time. Prompong sent the keeper the wrong way, but unfortunately for the Swatcats it was only to be a consolation as the referee blew the whistle seconds after the restart.

The other results in the group were both scoreless draws between Lamphun v North Bangkok and Rayong v Krabi. Roi Et already top the group and I predict that's were they'll be in the final standings after match day 10.

Korat took a bit of a battering in the first half yet they showed enough fighting spirit in the second half to give their supporters encouragement for the remaining 9 games.

EDIT: Korat lodged a complaint as Roi Et had six foreigners on the pitch instead of the permitted five from the 77th - 88th minute.
The judgement was made on Thursday 20th October. Roi Et's 2-1 win was reversed and Korat were awarded a 2-0 win. No punishment was administered to the match officials.

In my opinion Roi Et deserve to be punished for their incompetence. The rules are simple and surely a member of the coaching staff should have identified that there were 6 foreigners on the field.
However, I don’t agree with the decision to award Korat 3 points and a 2-0 victory. The infringement of the rules didn’t affect the outcome as Roi Et were 2-0 up and comfortably in control by the 77th minute. I would let the result stand as a 2-1 win to Roi Et, but then deduct 6 points from the White Squirrels.