Chonburi kept themselves firmly in the title race with a deserved 2-1 win over 10 man Chainat.

It was a fairly slow start to the game in the humid temperature with little to note in the first 20 minutes.

Thiago Cunha had been the most likely threat in the early stages and it was the Brazilian who opened the scoring in the 28th minute when he drilled home an Ifran Bachdim cross at the back post.

That lead for the Sharks lasted for barely a minute as the referee spotted an infringement inside the Chonburi box. Most of the spectators failed to see why he awarded a penalty, but the home crowd weren't complaining when Sumanya sent Sintaweechai the wrong way to level matters.

Chainat were dealt a blow in first half injury time when Tanongsak was given a second yellow for a lunge at Adul. The lack of protest from the men in pink suggested the ordering off was merited.

The second half then became basically one way traffic. Pipob should really have netted a diving header shortly after the break, and substitute goalkeeper Chalermkiat made a fantastic one handed save from Thiago minutes later.

The decisive goal came on the hour as Diakite rose majestically at the back post to nod home an Ifran cross to make it 2-1.

Therdask could have wrapped the game up five minutes from time, but the ball stuck under his feet inside the six yard box.

Chainat's 10 men never really looked like getting back into the match as Chonburi held out for a vital three points.

Man of the Match: Thiago Cunha - The Paolo Di Canio of Thai football 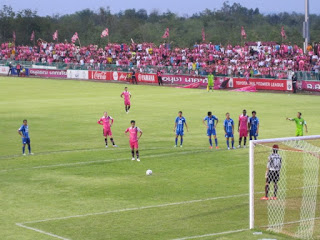 Posted by BKK Football Blog at 6:55 AM