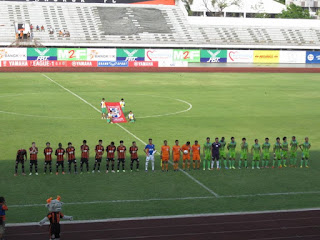 Bangkok FC edged a seven goal thriller against Rayong United to move within two points of the Top Three.

A Lee Tuck double in the first 35 minutes appeared to have the home side on easy street. The Englishman's first came when he converted a rebound after Olof Watson had hit the post, and the second was a 40 yard free kick which nestled in the bottom right hand corner of the net.

At this point of the game it appeared it was just a case of how many the Iron Bulls would score. However, five minutes before the break, Naratip, in the Bangkok FC goal, spilled a Valci Junior free kick which was then knocked in by Prainet to give Rayong United some hope.

Five minutes after the break, Valci Junior was allowed far too much space to roll the ball into the net before Wuttiphan made it 3-2 to the Elephant Warriors. Naratip wasn't brave enough to block Wuttipan's run and his weak attempt allowed the Rayong midfielder the opportunity to put the away side into the lead.

Valci Junior could have made it 4-2 but he scooped over the target while Samuel Danquah's header clipped the top of the crossbar bar as the hosts pressed to get back into the game.

With about 10 minutes remaining, that pressure paid off when a long free kick was headed goalwards by Olof Watson into the top corner of the net.

The momentum was firmly with Bangkok and with three minutes left on the clock a low Watson cross was swept home by Samuel Danquah to win the three points for the Bulligans.

At the end of the game, Rayong United would have been hugely disappointed to have scored three away goals, yet come away with nothing. I'm sure Bangkok FC would be delighted with the way that they fought back to win, but they will be slightly concerned at how easily they conceded the three goals.


Man of the Match: Lee Tuck - Another brace for the hard working front man
Posted by BKK Football Blog at 9:39 PM