The Tatong family would have been delighted that both brothers, Wuttichai and Chainarong, were on the score sheet, and that honors were shared at the Royal Thai Army Stadium between Army United and Suphanburi.

It was a bright opening to the match with both sides knocking the ball about confidently after good recent results.

Army had the best chance of the first half when Ngeneve had to be alert to clear the ball off the line after a Mongkol header had deflected off the post.

Three minutes after the interval, Wuttichai Tatong opened the scoring after a pass from the middle of the park set him on his way to score.

Boskovic and Castillo had chances to double the lead for the Suphanblood, but it was Army who were applying most of the pressure albeit with some wayward finishing in front of goal.

Just as it appeared that the hosts were running out of ideas, Anuwat set up Chainarong to fire into the roof of the net to level matters in the 81st minute.

Bireme Diouf could have won it late on, but his cross come shot was mopped up by Daniel Blanco.

The draw moves Suphanburi back into second place and takes their unbeaten run to seven games. Army are now five without a loss and sit in sixth place just behind the big boys.

Man of the Match: Ngenevu Divine - Cool and composed at the back for Suphanburi 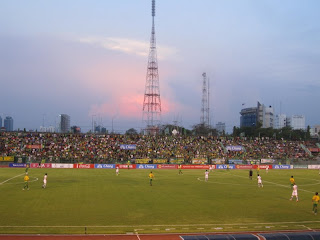