Buriram will play their fourth consecutive home game when they host Songkhla Utd. The Thunder Castle have yet to make a road trip in the TPL this season.

Ratchaburi and Chonburi were both fined after crowd trouble marred the end of their game last week. Nevertheless, the Dragons weren't punished with any ground closures, and home fans can attend the match with Muangthong.

Army v Bangkok United and Chonburi v Pattaya United could be described as local derbies, or 'super derby match' as you can see in the banner below. However, if we are going on past experiences, don't expect either away side to take more than a couple of hundred fans with them. 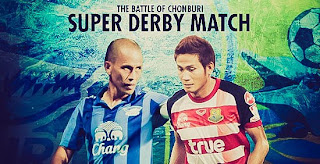 The Sisaket/Esan United saga still continues to rumble on as we await a definitive court ruling. So that means that Chiang Rai United have a free weekend as the match has been postponed. What a fiasco!!

Wichaya Dechmitr was given a one match ban and will miss out against TOT after abusing the referee at Bangkok Utd v BEC Tero last week. The midfielder will have extra time to have his bleached-blond hairdo coiffured at the hair salon this weekend.

Bangkok FC finally take their bow in Bang Mod for the first time this season when they host Air Force. The Bulligans hope to include ex-Suphanburi captain Worawut Wongsawat who has recovered from injury.

John Mary is likely to miss out for Krabi after he injured himself following a motorcycle accident.

After three years of promises, the floodlights at the PAT Stadium have finally been upgraded and Singh Tarua will be able to kick off at 6pm against BBCU.

The first ever meeting between Rayong FC and Rayong Utd takes place on Sunday. Rayong Utd hosted Singh Tarua at Rayong FC's home last weekend so they should be familiar with the surroundings. It will be interesting to see if this local rivalry is a friendly affair or a fiercely contested one.

Ayutthaya coach Tongchai Sukkokee has been given the dreaded vote of confidence by the Ayutthaya board. So, expect this to be his last game in charge.

The TTM Mystery Tour looks to have ended as their brief relationship with Lopburi has ceased to be. The 'Lopburi' tag has been dropped and the club will simply be known as TTM. The Bunyajinda Stadium will host their game this Sunday and sources indicate that this will be their home for the forthcoming future. The Bunyajinda Stadium is the Police Sports Club in Bang Khen.
Posted by BKK Football Blog at 9:12 AM