Both sides scored headed goals and had a man ordered off as it finished 1-1 between Nakon Nayok and Pathum Thani United.

Before the match, the hosts were top of the Central East while the guests were at the opposite end of the spectrum. For long periods, it was hard to distinguish which side was which.
Nakhon Nayok were denied twice by the woodwork in the first half. Pathum Thani had a couple of chances too but they couldn't hit the target.
In the 63rd minute, some fisticuffs between Chaiwat and Tawatchai had them dismissed. Within five minutes, the league leaders took the lead when a free kick was headed back across goal by Bamba to an unmarked Kone Adama.
Pathum Thani refused to give up an they equalized seven minutes from time. Instead of clearing the ball, Coulibaly Abdoul tried an acrobatic overhead clearance. His attempt only set up Winai to cross to Panwat who nodded in at the back post.
1-1 was a fair result. 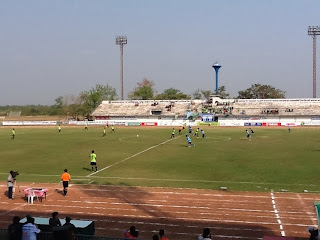