Prior to the game their was a massive downpour yet the pitch held up extremely well with little excess water evident on the surface.

Samut Sakhon took the lead on 57 minutes when Narongsak flicked a header over the stranded keeper in the Thai Honda goal.

The same man came close to doubling the lead twenty minutes later, but his free kick was knocked over the bar by Kanoksak. 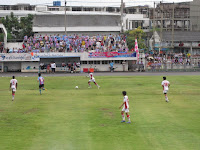 Just as it looked like hosts had earned a hard fought three points, Honda's second half substitute, Prawit, equalized two minutes from time with a sweetly struck free kick from 25 yards out to spoil the host's party.

Both sides will surely be in the shake up come the end of the season for the division two playoffs later in the year. After today's game, Thai Honda remain in second while Samut Sakhon drop to fourth.