BEC Tero and Army United played out a drab goalless draw at the Thephasadin Stadium. 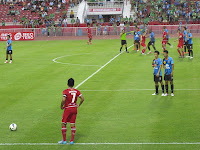 The game mirrored the impending rain clouds in that they both threatened to burst into life but at the end they just humbly passed by.

The only save I can recall either keeper making was a block by Army's Kosin with his legs from an Ekaphan shot shortly before half time.

Tero passed the ball neatly and held possession well, but most of their movement was sideways and by the time they knocked the ball forward, they were snuffed out by a well drilled Army defence led by Daniel Blanco.

Army will have been satisfied with a point but it's evident that they need to invest in a couple of strikers. They started with two midfielders upfront, one of whom was Lindemann, and Army certainly missed the German's creativity in the centre of the park.

Overall, a point apiece was a fair outcome as BEC Tero have temporarily moved up to third while Army remain in fifth.