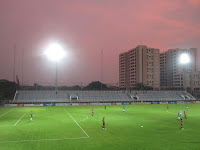 TOT remain in the bottom 3 after they could only manage a 1-1 draw at home to mid-table Police United. Fortunately for the Laksi side, their fate still remains in their own hands with games against Samut Songkhram (H) and BEC Tero (A) to follow.

The goals today were both a tale of two goalkeeping errors. Thankfully the national goalkeeping coach, Stefan Brasas, wasn't present to witness them.

The first mistake came 10 minutes from time when a free-kick from Prakorn Prempak appeared to be creeping by the post, but as Wattanapong in the TOT goal went to collect it, he inadvertently dropped it into his own net. It was straight out of the Bruce Grobbelaar fumbles of the 80's!!

The TOT keeper's blushes were spared 2 minutes later when a long shot from Thai international squad member Thanasak was spilled by Pattarakorn for Kone Mohamed to tap in the equalizer.

The draw was a fair result but from what I saw today, TOT will need to play better if they wish to remain in the TPL next season.