The home side looked the more likely to take the lead early on as North Bangkok's keeper had to be on his toes to make a couple of saves.

However, it was North Bangkok who took the lead on twenty minutes when a corner caught Jakarin out of position leaving Sathaporn with a free header at the back post.

Kasetsart lost their way after the goal and a double substitution was made on the half hour mark with Tahi Tiacoh and Chawin replacing the ineffective Manit and the unfortunate Essomba who was hooked to allow another foreigner to enter the fray.

Nothing seemed to change and the visitors had a great chance to make it 2-0 seconds after the restart. A swift break down the right found Sathaporn in the middle, but the goalscorer's shot was saved by Jakarin.

Kasetsart tried to throw bodies forward with many players rotating positions. Their pressing was creating few clear cut chances and the closest they came was from a Jakkaphan chip that landed on the roof of the net.

North Bangkok were holding out relatively comfortably and they had two great chances to double their advantage before they eventually put the game beyond doubt in the last minute.

A swift counter from Sathaporn set up Nirud, but his shot was blocked by the keeper. With seven minutes left, Teerasak watched his shot roll agonisingly past the post after he'd been left unmarked inside the box.

In the last minute, Pathoomchai rattled home from a tight angle after a corner had only been partially cleared into his path.

The only bright spot for Kasetsart this weekend was that main rivals NSRU and Nonthaburi both dropped points. Some of Kasetsart's play in the final third was poor and they'll need to be more creative in this area if they are to reach the playoffs.

North Bangkok now have the 6-6-6 record of wins, draws and loses. With performances like this, I'd expect the win column will be higher than the loses come the end of the season.

Man of the Match: Sathaporn - His pace on the break caused Kasetsart problems 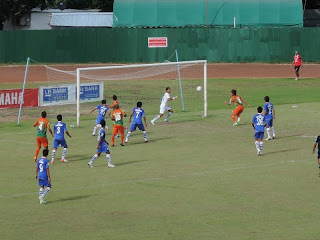