Seeker Futera moved up to third with a comprehensive victory over basement dwellers Globex.

The online managed side started with a 4-2-3-1 formation and they passed the ball neatly across the deck in the opening minutes.

Sayun gave Futera a seventh minute lead with a close range finish after a cross from Nattaporn had squeezed through a forest of legs.

Globex rallied and almost levelled three minutes later when Tsurumi dinked over the keeper. Fortunately, Thasthanya was on the line to clear the danger for the hosts.

However, Globex equalized with their next attack when Hattaphon slotted home after rounding goalie Worawut.

The home side regained the lead ten minutes before the break with Nattaporn scoring after a smart side-footed flick from Siwa had set him up.

The game slightly lulled after the interval although Sayan came close to making it 3-1 with a free kick.

The Ramkamhaeng side briefly dominated midway through the second half with Hatthaphon blazing over from inside the box while Sayan had to block on the line after a scramble inside the box.

The three points were duly wrapped up nine minutes from time when substitute Somsak cut inside his man setting up Stephane Mbazoma to launch a shot into the top corner.

In the last minute, Somsak drilled home a low shot inside the post to round off a 4-1 win for Futera.

Seeker Futera secured their third consecutive win as they moved to within four points of the playoff spots. They have some decent players in their team and if the online managers can make the right selections, then the playoffs could be within their grasp.

Globex remain rooted to the bottom of the league and you just wonder if their brief three year tenure will cease come the end of this season.


Man of the Match: Sayan Pengpun - He excelled in both attack and defence 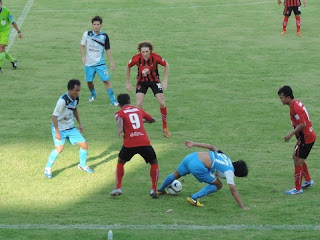