The hosts came close to taking the lead twice within the opening few minutes. First, a Leandro free kick hit the underside of the bar and then the ball spun fortunately off the unexpecting Ukrit for a corner. From the resultant corner kick, the keeper had to be alert to block a Christen shot from close in.

The next 35 minutes became a bit tetchy with with neither keeper really being worked.

As half time approached, Ukrit made a sublime one handed save from an Ali Diarra header to ensure the Oil Millionaires went in level at the break.

Ukrit didn't appear for the second half and was replaced by former Army keeper Watcharapong.

The early stages of the second half flowed from end to end with the midfield of both sides generally being bypassed.

PTT on the other hand, came close through substitute Kirati's glancing header and Adisak could have shown more composure as he blasted a shot across the face of the goal.

The all important winning goal came in the 73rd minute as PTT Rayong countered following a Tarua corner. It was four attackers on one defender as Kirati set up Amadou Outtara to roll the ball past Suphawat into the bottom corner.

Singh Tarua pressed for an equalizer and the closest they came was in the dying moments when a Leandro header bounced off the top of the bar and over.

It wasn't to be as PTT held on for three points. I wasn't overly impressed with them in the first half, but as they game went on they seemed to improve. They remind me a bit of Suphanburi last season in that they aren't overly exciting to watch, yet they get the job done.

For Singh Tarua, they have a massive week coming up with Korat away on Wednesday and Bangkok FC at home on Saturday. They have only collected eight points from their last eight games and they need to get their promotion train back on track. 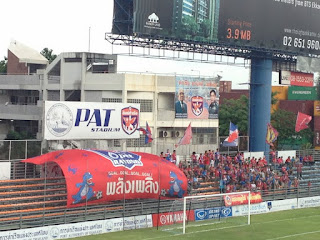