The current Division 1 leaders appeared to be heading for a comfortable home win with two goals scored in the first 30 minutes.

The first came midway through the first half when a short corner was crossed into the box for Supphakorn to nod home after the Rayong Utd defence failed to clear the initial danger.

On the half hour, a ball cut in from the left by Julius Oiboh was knocked into his own net by Pasawee.

The away side's best effort of the half came five minutes before the break when Cunningham scooped out a goal bound Valci Junior header on the goal line.

The second half was on the verge of dying a death until the introduction of David le Bras from the Rayong Utd bench shortly after the hour.

Within a minute, the broody Frenchman had split the Air Force central defence with a precise ball to set up Wuttiphan to pull one back.

The Elephant Warrior's fight back was on and Valci Junior twice brought out good saves from Samuel Cunningham as the home side nervously held on to their slender lead.

In the 80th minute, Rayong United were reduced to ten men when Chatchai received a second yellow card.

That seemed to take the impetus out of the guests, and as full time was approaching they were effectively knocked out as Wittaya was given a straight red for a hack at Kouassi Hermann.

The Airmen's victory saw them move six points clear at the top and despite not looking entirely convincing, they have a healthy lead at to kick on and claim a TPL spot.

Rayong United need to improve at the back as they conceded a couple of sloppy goals today. With Valci Junior in the side, they always look like scoring and keeping the Brazilian fit will be vital to their survival bid.

Man of the Match: Valci Junior - a constant threat 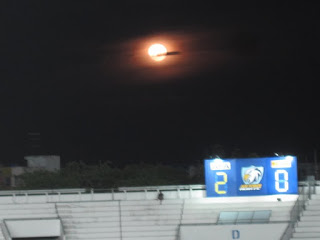