Saraburi thought they'd snatched a precious point when Bernard Henry levelled in the 90th minute only for Tossapol Yodchan to spoil the party moments later as Singh Tarua made it three wins out of three with a 2-1 victory.

The first half was a rather quiet affair by comparison with Sing Tarua controlling possession while Saraburi were content to use the pace of their wide men on the counter attack.

The best chance in the opening 45 minutes came to Leandro after Sarawut had set him up following a probing run down the right flank. The Brazilian though, pulled his shot narrowly wide from Sarawut's cut back.

The same combination was involved for the opening goal, but this time it was Leandro setting up the wide man. Leandro flicked the ball through the Saraburi back line to an offside Christen who left it for Sarawut to burst through from an onside position to open the scoring in the 51st minute.

Ri Myong Jun had been relatively quiet, but he had a great chance to double the lead midway through the second half. The Muangthong loanee's poor pass cannoned off a Saraburi defender kindly back into his path, yet with a one on one with the keeper, he shot straight at him.

Five minutes later, Saraburi hit the post after a weak punch from Watchara was knocked back into the mix and in the melee that followed, Henry hit the post.

As the assistant referee was set to lift the board indicating five minutes of injury time, Saraburi equalized. Henry beat Termchai to the ball in the middle of the park and the Ivorian ran through on goal to slot home.

However, it was the guests who grabbed the three points when substitute Tossapol Yodchan "bent it like Beckham" from 25 yards out in the 93rd minute to win the game.

Singh Tarua's last gasp goal means that they've won three out of three with all of the games being played on the road. The Khlong Toei side top the table and are seemingly on their way to an instant return to the TPL.

Saraburi look to me like a mid-table side, but if they could improve with their final ball into the box, then a top half finish could be achieved. 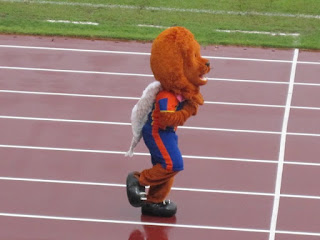 Man of the Match: Sarawut Kongjareon - Scored the opening goal and was lively down the flanks