Singh Tarua increased their winning streak to nine at the PAT Stadium with a narrow win over Nakhon Ratchasima.

Noah Chivuta came close for Nakhon Ratchasima in the opening minutes but for the rest of the opening period it was the home side who were on top.

Ivan Petrovic set up Kroekrit in the 25th minute but the Chonburi loanee fired his low shot wide of the target. Two minutes later Leandro's flicked effort hit the base of the post as the hosts increased the pressure.

Tarua finally made the breakthrough on the half hour mark when Leandro finished off a move at the second attempt after Ali Diarra's galloping run on goal had been blocked by Prasit.

As the interval approached, Tarua had chances to double their lead. First, Patrick Reichet scuffed his shot across goal and then Leandro's shot flew just wide.

The second half was rather quieter as Tarua sat on their lead inviting the guests to attack. Korat lacked creativity in the centre of the park and had little cutting edge upfront. At times, the Swatcats were committing too many men forward which left them vulnerable to the Tarua counter attacks.

Kriakiat's long range shot in the 77th minute was palmed over the bar by Watcahara and that attempt was the closest it got for Nakhon Ratchasima.

I thought the 1-0 victory for Singh Tarua was slightly more comfortable the the scoreline suggests. Korat to me seemed to have their eye on the bigger prize of winning the second leg of their League Cup semi final against Ratcahburi on Wednesday.

The win keeps Tarua sandwiched in third place one point behind PTT Rayong and one ahead of Bangkok FC. 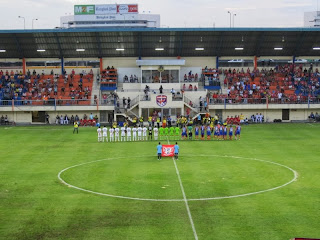 Posted by BKK Football Blog at 7:17 AM