Adisak Srikampang pounced 12 minutes from time to fire PTT Rayong to victory with the simplest header he'll ever score.

Bangkok FC looked on course for a victory as they took a 2-1 lead into the break, but two second half goals won an enthralling contest for PTT Rayong.

The home side made the perfect start, scoring with the first real chance of the game as Olof Watson headed home a corner. The ball certainly looked to have crossed the line despite a desperate handball by a PTT Rayong defender in the goal mouth.

Both sides had a couple of half chances to score before Meedech was penalised for an infringement on the edge of the box. Kirati was on spot kick duty, and he coolly send Beyeme the wrong way to level matters.

Amadou Outtara could have given Rayong the lead, but he hit the side netting after Jean Marc Beyeme had parried a shot into his path.

As the half time team talks were being prepared by both coaches, a corner from the left was flicked on by Meedech and finished by Tawin to give the Iron Bulls a 2-1 half time lead.

Bangkok could have had a third shortly after half time, but the ball got stuck under Watson's feet as he bore down on goal.

Adisak was introduced well into the second half, and in the 78th minute he pounced to head into a vacant net after Beyeme had horribly misjudged a Tirer free kick.

Watson and Tawin both had efforts that went close while Lee Tuck's dipping drive forced Pinho into a save as the Oil millionaires held out for the three points.

I thought 3-2 was a fair scoreline as PTT Rayong edged it for me. They are now only one point behind Air Force and barring a melt down, they should be in the TPL next season. The only concern for them today was that both goals they conceded came from corners. Bangkok FC will always score goals, but if they continue to make mistakes at the back, then I can't see them earning promotion. 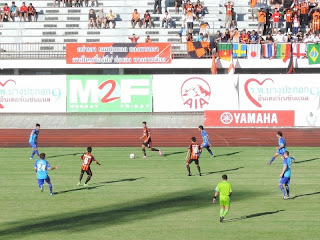