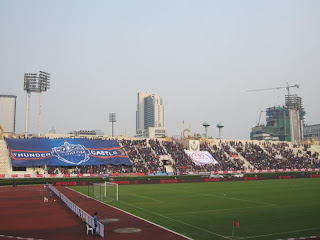 Jungo Fujimoto's double won the Toyota Cup for Nagoya Grampus as they beat Buriram United 2-0 at the Supachalasai Stadium.

Buriram were given an early warning of Fujimoto's attacking threat when a questionable offside decision by the assistant referee ruled out his goal after he'd dinked the ball over the advancing Siwaruck before tapping it into the empty net.

For large periods of the first half, the Japanese side bossed the centre of midfield, and they were rewarded on the half hour when Naoshi Nakamura was allowed to waltz across the Buriram rearguard. He linked up with Fujimoto twice before the Nagoya number 8 flicked the ball past the Buriram keeper with his left peg.

Buriram United appeared tired after their midweek exertions and made some second half changes which made little effect. With nine minutes left on the clock, "Denso" timed his run perfectly to latch on to a through ball to kill the contest with his second goal.

The Thai League Cup holders hit the bar late on but it was the Japanese club who were celebrating at the end. They become the first Japanese side to lift the cup since it was introduced three seasons ago.

Next up for the Thunder Castle is a trip to the Rajamangala* next Saturday to take on Muangthong United in the Kor Royal Cup. That will be followed three days later with Buriram heading to Japan to meet Vegalta Sendai in their opening AFC Champions League match. Incidentally, Buriram beat Vegalta Sendai after a penalty shoot-out in the Toyota Cup last season.

Man of the Match: Jungo Fujimoto