Muangthong United remain at the top of the TPL after a 2-1 victory over Chaing Rai United.

In the 12th minute, Mario Djurovski had a number of the West Stand on their feet celebrating, only for them to realize seconds later that his curled free kick had hit the side netting.

Despite that, it was Chiang Rai United who opened the scoring minutes later when a through ball released Kyle Nix who then dinked the ball over the advancing Weera. The ball tantalizingly bounced towards the empty net with Phichitpong ‘s desperate effort to clear the ball being in vain as the guests took the lead.

That 1-0 advantage only lasted for barely five minutes as Pichitpong won possession in the center of the park and then set up Sarawut to cut inside his marker to rifle home.

Muangthong probably shaded the first 45 minutes, but it was Chiang Rai who had the best chances at the beginning of the second period.

First up, Anon rounded Weera, but his shot was thwarted for a corner, and then the same man’s header hit the bar and then bounced off the rear of Weera before the keeper grabbed it in the nick of time on the line.

The decisive goal of the match came in the 70th minute. Teerasil played in Sarawut and he put the ball across the goal invitingly for Dagno Siaka to tap into an open net.

With ten minutes left, a right footed Datsakorn free kick hit the underside of the bar, and then bounced down invitingly for Dagno, but he somehow couldn't connect as Muangthong saw out the remaining time to win 2-1.

It was a tough win for the Kirins, but they probably just deserved to win it. Chiang Rai fought well and I’m sure they’ll pull away from the bottom of the table sooner rather than later.

Man of the Match: Sarawut Masuk – Scored one and set one up 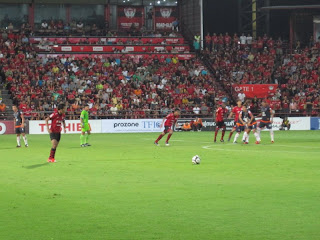 Posted by BKK Football Blog at 6:54 AM