Kasetsart strolled to a 3-0 victory over Chamchuri United to win the sunny Monday afternoon encounter.

The home side took the lead on 13 minutes when Chawin played a slide rule pass into the box for Dion Marc Sede who squared it to Augustine to bundle into the net.

Chamchuri's tactic was to get crosses into the box for the tall striking pairing of Narawich and Rittiporn while Kasetsart preferred passing the ball on the deck and hitting on the break.

Dion had a goal ruled out for offside before the lead was doubled for the hosts in the 40th minute. Chawin broke down the right and swept a low cross into the box. Nattapong in the Chamchuri goal blocked Dion as he was about to pull the trigger, but unfortunately for the keeper the ball rebounded to Jakkaphan on the edge of the box who rammed home to make it 2-0.

The away side made a couple of changes early in the second half, yet they made little difference. Jakarin in the Kasetsart goal could have pulled out a deck chair and smoked a cigar as he didn't have much action to preoccupy himself.

Dion and Chawin wasted gilt edged chances to secure the game before Dion did that in the 78th minute. A long throw in from the left somehow made it through a cluster of bodies to Dion at the far post who then drilled a shot into the bottom corner to wrap up the three points.

The game was done and dusted, but Kasetsart were reduced to 10 men near the end when Prakasit needlessly elbowed an opponent in the kisser while he was standing two meters in front of the referee. 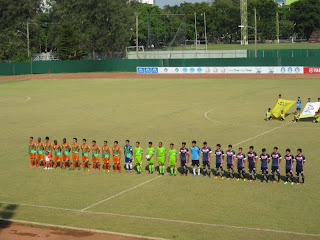