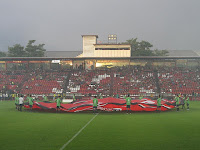 Muangthong United came from behind twice to grab a hard fought 3-2 win over Pattaya United.

Pattaya took the lead on 5 minutes when Juhas smartly headed home a free kick from the right.

The Twin Kirins had a strong penalty shout on 10 minutes when Seeket appeared to clear the ball off the line with his hand following a Rangel header.

The big Brazalian was aggrieved with the officials' failure to award a penalty, yet he was celebrating five minutes later as he headed home a looping cross from Piyaphon.

The home side had chances through Ekkapoom, Datsakorn and Gjurovski but went into the interval tied at 1-1.

Anuwat Inyin's deflected shot restored the Dolphins lead shortly after the break and Ludo came close making it 3-1 moments later as he forced Kawin into a near post save.

On 57 minutes, the TPL leaders drew level when Rangel nodded a cross from Piyaphon back across goal for Gjurovski to equalize.

As all predators do, they pounce when the victim is wounded, and two minutes later Pichitpong smashed home after a corner from the right was pulled back to him.

Pattaya pressed for an equalizer but Muangthong held strong despite the large exodus of home fans minutes before the final whistle. They weren't leaving because they were nervous. It was to join the snaking queue outside to purchase tickets for the big clash with Buriram United next Saturday.
Posted by BKK Football Blog at 7:26 AM