A Tawin double gave the advantage to Bangkok FC in the battle for the third promotion place as the Iron Bulls beat Singh Tarua 2-1.

The away side had their noses infront coming into the game and it was they who set up with a cagey 4-5-1 formation. The opening half hour was fairly devoid of any action yet it was the hosts, playing with a more traditional 4-4-2 formation, who were more intent on making the breakthrew.

The opening goal came in the 32nd minute when Tawin neatly cut inside his marker and fired home from inside the box.

Tarua made a double substitution at half time in a bid to bolster their attacking options. However, it was Bangkok FC who doubled the lead in the 57th minute when Lee Tuck slithered his way along the byline before teeing up Tawin to shoot home at the near post.

Within two minutes, Tarua were back in the game after Ali Diarra headed home a Leandro cross after the Brazilain's initial corner had returned to him.

The closest Tarua came to equalizing was a Sarawut header in the 66th minute which landed on the roof of the net.

Unfortunately for the 2,000 plus Tarua contingent, there was to be no fightback as Bangkok FC whittled down the clock fairly easily with a combination of stubborn defending and timewasting. The visitors ran out of ideas and resorted to hitting aimless high balls up to Leandro and Christen.

The 2-1 victory means that Bangkok FC move two points clear of Singh Tarua with three games to play. They only positive from today for Tarua is that they'd hold the better head-to-head record if both teams finished level on points. Bangkok have Rayong FC (A), Krabi (H) and PTT Rayong to finish. Singh Tarua now need to beat TTM (H), Nakhon Pathom (A) and Air Force (H) and hope that the Bang Mod side drop points in one of their three remaining fixtures.

Disappointingly, or somewhat predictably, the end of the game was marred with crowd trouble as both sets of fans were supposed to be paying respect to each other in the traditional Thai way. 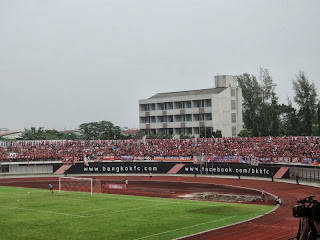 Posted by BKK Football Blog at 6:56 AM