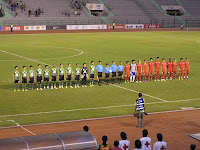 Army United were dumped out of the Thai FA Cup after they lost 4-3 on penalties to regional league side, Trat FC.

Trat had gone close three times through Kittipan, Sittichai and Toth before they opened the scoring on 20 minutes. A free kick was floated into the box for Sittichai to head into the path of Suchakree to shoot home.

Up until that point, Army's best chance had come through a looping misplaced clearance by Thanawut that fortunately landed on his own crossbar.

The home side did improve as the half went on and Chaiwat scored from close in when a low free kick was deflected into his path.

The Division 2 side's earlier impetus faded after the break and Army came close twice with Invincible forcing the Trat's keeper into a point blank save, and Alves hit the top of the crossbar with a header.

The sides couldn't be separated after 90 minutes and as predicted extra time was about as entertaining as watching an episode of Sex and the City.

So it went into penalties with Trat's keeper saving the first effort from Army. Every spot kick after that was converted until Alves blasted one over the bar to give the White Elephants the 4-3 victory on penalties.

Army's cup exit tonight was the third time in little over a year that they've been eliminated by a regional league side. Their loss highlighted the ongoing problem of a lack of strike force, and unless a proven goalscorer is found, I doubt Army will maintain their top 6 status in the TPL. As for Trat, they can be incredibly proud with their performance. For the first 30 minutes they were excellent in attack and when they tired towards the end they defended ruggedly. If they keep playing with this spirit, they should be in Division 1 next season.

Posted by BKK Football Blog at 8:18 AM