The Kor Royal Cup final this Saturday gives the two powerhouses of Thai football their first opportunity to flex their muscles for the 2014 season. Treble winners and current Kor Royal Cup holders Buriram United face TPL runners up Muangthong United at the Suphanburi Stadium.
It's a re-run of the 2013 fixture which Buriram won thanks to two goals from debutant Ramses Bustos - remember him?

It's been a fairly quiet off season over at the Thunder Castle. Nevertheless, Buriram were dealt a blow when their linchpin at the back, Osmar Ibanez, departed for FC Seoul. Fortunately for the treble holders nobody else of note has left the squad. Former Deportivo la Coruna centre back David Rochela will fill the boots vacated by star man Osmar. Also joining Buriram are the Argentinian duo of Leandro Torres and Leonel Altobelli, and Englishman Jay Simpson who is best remembered as a promising youngster at Arsenal.

Opponents Muangthong will want to eradicate any memory of the 2013 season and will be hoping to recapture the form which saw them romp to the 2012 title.
The main talking points over the new year period were the arrivals of two Englishmen in Nonthaburi. First to enter the fray was new coach Scott Cooper. His appointment to Muangthong will add some spice to this contest as Cooper coached Buriram for 29 games in 2013. Despite only losing once in that period, friction between himself and the club owner meant that he parted ways with Buriram United. The other noticeable arrival to Muangthong was once capped Englishman Jay Bothroyd. He's played for a host of clubs in England but his most productive spell was probably in Wales with Cardiff City.
Meanwhile, Teerasil still remains at Muangthong despite ongoing speculation linking him with a move to Spain. Keeper Kawin has been back in the treatment room after briefly returning for the SEA games while elder statesmen such as Panupong and Pichitpong have been shipped out allowing younger blood to replace them.

With both sides clear favorites to be battling it out for the 2014 crown, the winner of this opener will claim the first bragging rights of the season. 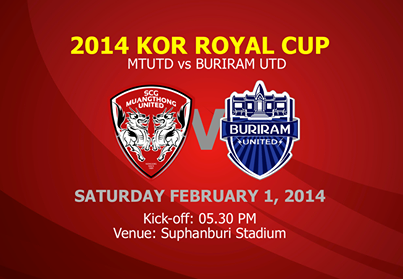