Krabi read the last rights to Raj Pracha's existence as a first division side as they brushed them aside 4-1.

Straight from the off, Krabi were on the front foot and the most surprising thing was that it took them five minutes to score. Ekachai and Anuwat had both come close before Ekaphan netted after he'd been set up by his family member Ekachai.

The goalscorer then blazed over minutes later before Ekachai volleyed into an empty net after the Raj keeper punched the ball weakly into his path.

It was one way traffic and Raj Pracha were fortunate when Michel Liade's free header from a corner hit the bar. 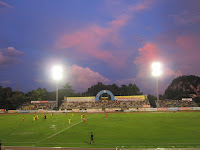 Raj Pracha did eventually force a bit of pressure and they pulled one back on 39 minutes when a header across the goal went through the Krabi keeper and Rewat tapped in.

Krabi always appeared to be in control and they regained their two goal lead shortly before the hour. Ekaphan crossed low from the right and the ball seemed to bobble off Thaweepong into the guest's goal.

The game quietened down until the stroke of full time when a breakaway from substitute Justine Uche Prince set up Thaweepong to sweep home for his second goal of the night.

Overall it was a comfortable win for the Energy. Raj Pracha had a couple of 10 minute spells were they looked half decent but for the main they played like a side that was resigned to their fate.