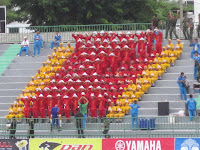 Army went ahead on 18 minutes when slack marking allowed Danny Invinsible a headed goal following a cross from the right.

Danny Blanco doubled the lead eight minutes later when he planted a header from a corner into the roof of the net. TTM weren't helped as they were down to 10 men after defender Diomanda Adama decided that he needed unnecessary treatment for an injury. When will these players learn that you don't ask for treatment whilst defending a set piece!!

The away side were gifted a goal shortly after the interval when Army sloppily lost possession in the center of the park, and from the resultant break down the right, the cross into the box cannoned in off Army's Danny Blanco and goalkeeper Kosin to give TTM a lifeline.

Despite the goal, Army were on course to secure a welcome three points, but in the third minute of added time, Giorgi collected a half cleared corner on the edge of the box and rifled past Kosin to salvage a precious point for TTM.

Army will have been bitterly disappointed to have thrown away a two goal lead and will rue how easily they gifted TTM the first goal. Surely now their priority in the transfer window is to find a Thai striker who can replace the slot disappointinly vacated by Jo 5 Yards. Or as some have hinted, a decent coach!

The Thailand Tobacco Monopoly still remain at the fag end of the league table and on tonight's evidence in the first 45 minutes, that's the position they'll fill at the end of the season. Nevertheless, their fightback should offer them encouragement as they aim to claw back the four point gap between themselves and safety.